A very rare gem my daughter’s Ballet Teacher staged a long time ago in Russia, which many of my friends might enjoy! This is significantly important, to history, believe it or not, and dance.
Here is also a very bad translation of the Russian language text underneath the video-sometime after he left the Kirov and Novosibirsk Opera ballet….and before his degree in choreography. Wow.
“”Staging [or starring] Ilya Gaft, Honored Artist of Karelian Autonomous Soviet Socialist Republic.[Not sure, he is a very modest man] “”In 1952 he graduated from the performers faculty of the Leningrad Choreographic School, where training in the specialty “ballet dancer” adopted children, who in the year of receipt is executed, usually 10 years. [He was not adopted, but this means, I think, he was ‘accepted’ into the school where he stayed 10 years, so he might as well have been adopted] He was a ballet dancer [also] in the Karelian musical theater in Petrozavodskm [also, the Kirov and Novosibirsk, where he was Principal]. In 1967, he headed a group choreography at the Leningrad State Theatre “Music Hall” (without choreographer diploma); Gaft in 1970 graduated from the Department of choreography at the Leningrad Conservatory;”” ENJOY!

Sessions are July 1-31, 2015 and August 1-31, 2015. Check out the Pinterest photos of this fabulous International Vaganova Summer Intensive. 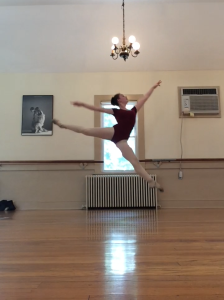 If you would like to receive an application packet for The New York Ballet Institute Summer Intensive 2015, training information, scholarship assistance or general inquiry, please fill out the form above or contact them at nybisummer@gmail.com

She has raised a whole $20 and she is very excited it is underway! I know it does not sound like much but any donation is inspiring and considerate and appreciated!

She started her classes this weekend, although we have met with her teachers very often. She and they are very thrilled to begin work. She is a very hard worker and has already obtained a part-time job in the evenings.

Already she is learning that there are very strong difference in the technique and artistic styles and her teachers are very old school. I will leave those wide differences and contrasts to her to explain in her updates to her Appeal. If you should choose to subscribe or to donate, she will keep you posted!

On the other hand, of you donate to this blog (or both), I will put your investment to good use as as well. Currently, I’m planning to begin a ballet school in New York for underprivileged children. They will only pay what they can afford, if anything, for correct ballet training. If anyone is interested in assisting with this, please contact me directly.

As usual, if you want to read up on the Differences of Movement, check out my book on my blog under differencesofmovement.wordpress.com

Thank you and Keep On Dancing!

Alla Sizova, one of the leading ballerinas of the Kirov Ballet during the 1960s and ’70s and an early partner of Rudolf Nureyev, died on Nov. 23 in St. Petersburg. She was 75.

A friend, Marina Gendel, said the cause was cancer.

Ms. Sizova’s outsize talent was apparent even before she joined the Kirov (now the Maryinsky) in 1958. When she was still a student at the Vaganova Ballet Academy in Leningrad (as St. Petersburg was then known), her extraordinarily high jump and astounding technical prowess as the Queen of the Dryads in a school performance of “Don Quixote” won raves from the Leningrad critics and a nickname, Flying Sizova.

Her graduation performance was the pas de deux from “Le Corsaire,” in which she was partnered by the young Nureyev. He challenged her to substitute the more difficult Dryads variation for the usual one, and to further increase its difficulty by adding double pirouettes to a series of virtuosic steps known as Italian fouett?s. Few ballerinas, if any, have since repeated that feat.

Ms. Sizova was part of an exceptional generation of Kirov stars that, besides Nureyev, included Irina Kolpakova, Alla Osipenko, Yuri Soloviev and Natalia Makarova. Ms. Sizova was paired regularly with Nureyev in their first years with the Kirov, and the Soviet authorities gave them an apartment to share.

(In her 2007 biography of Nureyev, Julie Kavanagh quotes the ballerina Ninel Kurgapina recalling Nureyev’s reaction: “They’re giving me a flat! With Sizova! They think by doing so I’ll eventually marry her! Never!!”)

This group of dancers caused a sensation when they were seen on tour in the West in the early 1960s, Ms. Sizova not least among them. Reviewing a Kirov performance of “The Sleeping Beauty” at the Metropolitan Opera House in September 1961 for The New York Times, an enthralled John Martin began by writing, “If Alla Sizova of the Leningrad Kirov Ballet would like to have the City of New York, all she has to do this morning is ask for it.”

Alla Ivanova Sizova was born on Sept. 23, 1939, in Moscow, only weeks after Germany invaded Poland and started World War II. Her family moved to Leningrad soon after, but in 1941, Alla and her only sibling, a sister, were evacuated with their mother to the Ural region in the east. Her father remained in Leningrad, which by then was under siege by German forces, to work as a driver delivering bread.

The family was reunited in Leningrad toward the end of war, and Ms. Sizova began to attend an after-school dance program. Her talent was noticed. She was accepted at the prestigious Leningrad Choreographic School (later to be named after Agrippina Vaganova), where she was taught by Natalia Kamkova.

Unusually, she was taken into the Kirov Ballet with the rank of soloist, and promoted to principal soon after. During her first three years with the company, she performed at least 14 principal roles, including Masha in “The Nutcracker,” Princess Florine and Aurora in “The Sleeping Beauty,” Myrtha in “Giselle” and Katerina in “The Stone Flower.”

A back injury kept Ms. Sizova offstage for two years in the mid-1960s, but her career continued to flourish well into the ’70s, with particular acclaim for her performances in “Giselle” and “Cinderella” and her spirited Kitri in “Don Quixote.”

Ms. Sizova also created roles in a number of ballets, including Igor Belsky‘s “Leningrad Symphony,” Konstantin Sergeyev’s “Hamlet,” and Oleg Vinogradov’s “The Enchanted Prince” and “The Fairy of the Round Mountains.”

After Nureyev defected to the West in 1961, Soloviev, another brilliant young dancer, became her regular partner; in later years she also danced with the young Mikhail Baryshnikov.

Ms. Sizova married Mikhail Serebrennikov, a television producer and director, in the early ’70s. They had a son, Ilya, who was 6 when Mr. Serebrennikov died of an aneurysm in 1980. Ms. Sizova retired from the Kirov in 1988 and accepted a teaching position at the Vaganova Academy.

By 1991 Mr. Vinogradov was running the Kirov-affiliated Universal Ballet Academy in Washington and invited Ms. Sizova to join the faculty. The Soviet Union was dissolving, and Ms. Sizova was able to move with her son to Washington.

There she became a much-loved teacher, noted for her emphasis on musicality above technical proficiency and for her kindness to her pupils.

Her son had meanwhile returned to live in St. Petersburg, and when he died in a drowning accident in 2004, Ms. Sizova, too, went back to Russia. Mr. Vinogradov tried to persuade her to come back to the United States, or to rejoin the Vaganova Academy, but she refused and became a recluse, rarely seeing former colleagues or pupils while living with her sister, Nina Ivanova, who survives her, along with a niece.

Ms. Sizova developed Alzheimer’s disease in the late 2000s and received a diagnosis of cancer four months before her death.