Ballet San Jose Silicon Valley successfully overshot its do-or-die fundraising goal over the weekend by almost $100,000. Many see it as a much-needed shot in the arm for the valley’s fragile art scene.

“The community does not want to lose another arts organization,” said Lisa Mallette, head of City Lights Theater Company. “People are willing to step up and ensure that this one remains strong and vital.”

The South Bay’s major resident dance company snagged $640,000, more than the $550,000 it needed to stay alive. With the emergency push behind it, ballet leaders said they intend to reboot its operation, including rebranding it: Silicon Valley Ballet.

“This campaign proves that people care about the ballet as much as we do and it gives us the ramp we need to get out ahead of the situation,” said ballet CEO Alan Hineline. “Finally there is some good news for the arts in the South Bay. We believe the ballet can be a rallying point for the city and the downtown.”

Withhttp://extras.mnginteractive.com/live/media/site568/2015/0310/20150310__SJM-BALLET-0311~1_300.JPG many in the arts community still reeling over the loss of San Jose Rep, the fact that the ballet stayed afloat is the source of great relief. It was also seen as a vote of confidence that the valley, often knocked as an industry town interested only in high tech, also values the arts.

TEETERING ON THE EDGE

It’s also a refreshing outcome because it comes after a series of devastating losses in recent years.

The region has lost not only the Rep, which went under last year, but also Shakespeare Santa Cruz, which died in 2013 (before being reincarnated in a smaller form) and American Musical Theatre of San Jose, which perished in 2008.

Hineline, for one, has been pushing hard to buck the trend of local arts groups teetering on the edge.

“We know that the collapse of the Rep hurt everyone. A loss like that sends shock waves,” Hineline said. “We wanted to change that narrative, to change the ending of that story — and we did. Finally there is some good news for the arts in the South Bay.”

So, what made the ballet better positioned for survival than the Rep, which was also a beloved local institution?

One of the smartest moves the ballet made may have been making a public appeal over its fate, instead of slipping away quietly.

“The Rep went under without a word, which upset a lot of people,” said Andrew Bales, head of Symphony Silicon Valley. “The ballet made some noise and gave people a chance to have their say.”

Of course, this could be just a temporary reprieve. Ballet leaders must stay on their toes because there is another deadline looming. Company officials say they will need to raise $3.5 million by October to restructure the company’s business model and re-brand itself as Silicon Valley Ballet. The troupe, now led by ballet hotshot Jose Manuel Carreno, wants to raise its profile and reach out to a wider geographic audience.

The troubled company, which partnered with New York’s American Ballet Theatre in 2012, has weathered many fiscal crises over the years. Old debts have piled up, including a $500,000 tax bill, and the company’s biggest patron, John Fry, CEO of Fry’s Electronics, dialed back his patronage. The ballet has countered by cutting back, scrapping some performances and dropping live music accompaniment here and there. The budget for the organization, which includes 32 professional dancers and bustling school of 350 students, now stands at $5.6 million, down from a high of $8 million.

One of the most frustrating aspects of the harsh South Bay arts economy is the comparative wealth of groups in San Francisco and Berkeley. Yet local arts honchos suggest these struggles may simply be growing pains.

“The San Francisco art scene was built over 150 years, seeded in the Gold Rush,” said Randall King, head of San Jose Stage Company. “South Bay cultural resources have a relatively short history. We have built a competitive environment in a very limited timeline. We are younger, but no less valid or viable.”

Ballet San Jose announced this week that it must raise $550,000 by March 14 to keep its doors open.

The company has a troubled past when it comes to leadership and funding. For instance, it sought out loans to help cover what critics more or less dubbed as over-ambitious seasons during the final decade of artistic director Dennis Nahat’s leadership. In 2013, former American Ballet Theatre dancer José Manuel Carreño was appointed AD. As we reported in our January 2014 feature, during his first season, the company’s prospects were looking up. Though Carreño had little to no experience running a company, his fame helped donations rise during the 2012–13 season and Ballet San Jose nearly broke even, compared to a $1 million operating loss in the previous year.

In a press release, BSJ said that if it is open come September 2015, the company will rebrand itself as Silicon Valley Ballet—a move to more closely identify itself with the neighboring tech community. 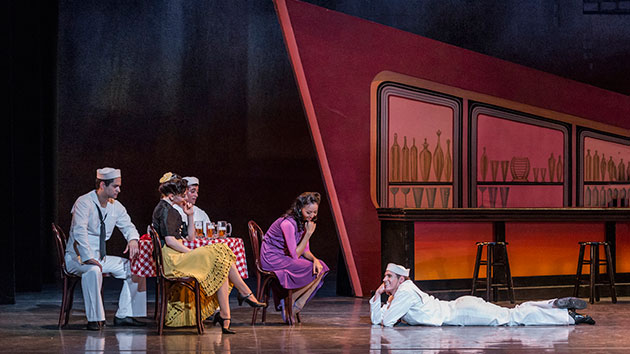 Fancy Free, whose company premiere Friday highlighted Ballet San Jose Silicon Valley’s first repertory series, would seem a natural for the troupe. Now a close ally of American Ballet Theatre, its artistic director, stellar ABT alum Jose Manuel Carreno, was known for his macho participation in Jerome Robbins’ classic romp about three sailors on shore leave, the bones of which were to lead to the smash musical On the Town, now in Broadway revival, and thence, via Gene Kelly and Frank Sinatra, to the movie version and immortality.

Fancy Free, created when Robbins was still dancing with Ballet Theater, remains one of his greatest works, also paving the way for landmarks by its young and brilliant composer, Leonard Bernstein.

But, like most great choreographers, Robbins left orders in place to guarantee that his work would be staged the way he wanted it staged. We also see this, of course, in the work of George Balanchine and Twyla Tharp among many others; both of them were also represented Friday in Theme and Variations, a BSJ standard, and In the Upper Room, which joined the rep last year.

The way staging happens is in part through the sharing of dancers’ physical and performance recollections – dance being very much a “body to body” art form, as Edward Villella says – as well as film and notation (and pointed remarks) directly from the creator. So the stagers for these three ballets, designated by the respective artists and their trusts, worked with Ballet San Jose’s dancers to make everything the way it ought to be. They were (Fancy Free) Philip Neal, who danced for Robbins when he was co-ballet master-in-chief (whew) at the New York City Ballet; (Theme and Variations)Sandra Jennings and Stacy Caddell for the George Balanchine Trust, also at City Ballet, and (In the Upper Room) two former Tharp dancers, the great Shelley Washington, and Gil Boggs (now Colorado Ballet’s artistic director).

Of the three, Fancy Free was the standout, rising way above the tinny, taped music (Ballet San Jose, still woefully short of funds, could not reach an agreement for the services of Symphony Silicon Valley). Richly nostalgic with its angular Oliver Smith bar-room set design and Bernstein’s score, its keen rhythms evoking his fascination at the time with things Latin, plus the entire notion of carpe diem or, dare we say, dame – it was, after all, shore leave in the middle of World War II; everything, particularly the rhumbas, the moments of boyish brooding, the fights, the flirts, the resilience, the friskiness of the chase, all of it came together at the San Jose Center for the Performing Arts so precisely, with fine technique and such wonderful, readable nuance.

In the small cast, the great performances abounded: Rudy Candia, Walter Garcia and Joshua Seibel as the gobs; Grace-Anne Powers and Ommi Pipit-Suksun as their leggy quarry, and, in smaller roles, Emma Francis as a last-minute distraction, and James Kopecky as the long-suffering bartender.

Theme and Variations, all satin, tutus, Tchaikovsky (Suite No. 3 for orchestra) and chandeliers, went off without many hitches, though this taxing and stunning opener needed a few moments for the company to hit its stride. In the leads, principal dancers Junna Ige and Maykel Solas were prodigies of durability and grace, drawing in all viewers for the central ballet, Balanchine’s wonderfully intimate, tender yet frolicsome pas de deux.

As noted here before, this – thanks in no small part to Glass – is one of the great creations of Tharp or anybody else. It flies by, and the minute it’s over, you want it all again. Is it the dry-ice fog, the lights, the Norma Kamali black-and-white prison pj’s contrasted with red tops and toe shoes, or white sneakers and shirts? Nah. It’s Twyla, first, last and always. Nobody has ever pointed up as viscerally what it means to dance and perform, in so many ways, as she does. (Oh, we could perhaps argue that her Push Comes to Shove is equally brilliant in this argument, plus it came equipped with Mikhail Baryshnikov at its premiere. But no.)

At any event, Ballet San Jose, even on its uppers, gets and represents In the Upper Room to the marrow of its bones. This company needs – and all of us need it – to keep on dancing.

Janice Berman was an editor and senior writer at New York Newsday. She is a former editor in chief of Dance Magazine