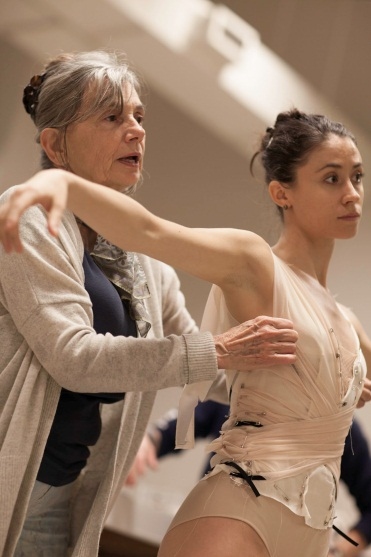 This spring, Atlanta Ballet will present the world premiere of a ballet based on “Camino Real” by Tennessee Williams, the renowned playwright who authored such American classics as “A Streetcar Named Desire” and “Cat on a Hot Tin Roof”. Choreographed by Atlanta Ballet choreographer in residence Helen Pickett, Williams’ “lost classic” of love, redemption and courage will debut March 20-22 at the Cobb Energy Performing Arts Centre. Check out pictures and renderings from the show below!

Inspired by Williams’ 1953 Broadway play of the same name, the story is told from the perspective of Kilroy, a character based on patriotic iconography from the WWII era. The young American soldier and onetime prizewinning boxer finds himself trapped in the surreal, dead-end town of Camino Real forced to grapple with mortality, the burning desire to connect and the will to live.

Through his journey to bring renewed hope to the town of lost souls, Kilroy meets a cast of unlikely characters from various periods of history and pop culture, such as Casanova, Esmeralda (The Hunchback of Notre Dame), Marguerite (The Lady of the Camellias), and Lord Byron, who together struggle to escape their fates.

“This is your classic good versus evil story,” said Pickett, whose adventure with the play began five years ago when her father handed down his copy from his college theater days, suggesting it would make a good ballet.

“I read it once and put it away, not understanding how I might tackle the content,” said Pickett. “A year later, I picked up the play again, and found my way into the story: focus on the characters first. Now, it is such a part of my reality, I can’t imagine how I will let go of these characters.”

Pickett announced the project shortly after accepting her residency with Atlanta Ballet in 2012 and has been working on the production ever since. Every aspect of the ballet, from the music to the costumes to the set design, has been a collaborative effort between Pickett and the team of artists she assembled.

To design the whimsical costumes, Pickett chose award-winning designer Sandra Woodall, who she has known since her days as a student with San Francisco Ballet. Woodall then introduced Pickett to lighting designer David Finn, whose commissions include Cirque du Soleil and numerous other major U.S. ballet companies. Finn then recommended set designer Emma Kingsbury, who he subsequently worked in tandem with on the scenic design. The rich, textured score, which Pickett has described as a character all its own, is the creation of composer Peter Salem.

“All of these people truly enjoy the art of collaboration,” said Pickett. “They are magnificent artists that bring all their ideas to the table. We are like mix masters; we just throw all of our concepts into the bowl and stir and filter. I am in love with each of them and their visions.”

The final layer of the creative process was the choreography- a collaboration as well with Atlanta Ballet’s full 23-member company. Pickett began working with the Company in September, devoting full days to rehearsal to ensure that the 75-minute ballet would be complete by its March premiere. By opening night, more than 300 rehearsal hours will have gone into bringing the production to stage.

To add to the theatricality, Pickett has also challenged several of the dancers to learn lines. Williams’ text – actual excerpts from the play – will be spoken by the principal characters throughout the ballet.

“It’s a new situation for them,” said Pickett in a 2014 interview with Creative Loafing. “But they are opening and unfolding in incredible ways. I wouldn’t have asked them to do this the first time we worked together. You have to build trust between you and the performer so that a person feels like they can open up, so cracks can happen in those walls, maybe even a breakthrough can happen.”

Atlanta Ballet’s world premiere of “Camino Real” will open at the Cobb Energy Performing Arts Centre on Friday, March 20 with a red carpet opening night. Three performances will follow, including the finale on Sunday, March 22.