Sometimes I feel exhausted, so tired and alone,

as if what I am reaching for is nebulous.

in my dreams, will suffocate me.

Sometimes I whine, the pain, the futility of repeatedly trying and failing,

is not resulting in the object of my desire.

But being alone, tired, sore, injured, blindly striving, monotony and repetition, even nightmares-all

feel good after a perfect ballet class! Truthfully, it is alone that I reach for the stars, muscling my body for Mars, to the music I sweep,

across the stage so wide, just hoping for my chance to be alive! 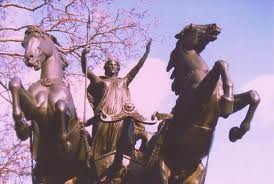 This is not how I imagine Boadicea in my mind. It has always been me. Hair flying, sword in one hand, daughters cupped protectively under one breast. In the other hand, my rein, of the horse driven chariot. I ride triumphant. I ride alone. I ride, despite turmoil, war, poverty, hypocrisy and against all odds. Odds are important. Surmounting them builds character. Inspiration comes in many forms and from invariable and sometimes unlikely places. I have never gotten anything for free and have never valued or kept anything I did not have to fight for. If I didn’t have to fight for it, then I just did not think it worthy of my time or effort. This includes e-v-e-r-y-t-h-i-n-g.

I first read about her in a book entitled Sarum. Then I hunted out Warrior Queens. Since then, I have read every bit of drivel about women pirates, leaders, queens, and concubines, and I always did have a serious fascination with fairy tales, especially Russian and Chinese, mythology, and Shakespeare. Which are surprisingly full of heroines-not weak. I was good at finding obscure books, like Woman in White and The Cloister and the Hearth. I studied Chinese language, a dream of mine, probably stemming from those fairy tales, and of course, ballet. Once I discovered the Russian fairy tales linked in ballet, I was hooked. My childhood was linked with my future (I thought then, I know now).

But of all those lusty heroines, Boadicea was my queen. She, for personal reasons, replaced the saint in my saintless life, and my religion has always been to conquer in the face of death, my goals. Was I to think that my passion for my children, would be any less flaming than my own desire to go where no woman has ever gone before? I did, in a way, do that. For the music business in the early 1990’s was not populated by even one successful female. No woman ever had had a record company I believe, even if my own was born out of management, and creative marketing of unsigned bands, I did it with no less flamboyancy than the best. It was difficult. Being a mother of a young son, at the same time, made it inadvisable, and being in England, alone, with a band, and no money, made it seemingly impossible.

Without thinking twice, I found a way to take 17 cassette tapes, $100 per week, and my will, and turned them into a flat on Baker Street, a son in  London public school, 10,000+ cds, and 2,500 press outlets, radio stations and distributors. In the stores in less than 3 months. I started in November. Published date was March 1st. We did a live radio interview on WNEW in the middle of the night in February, cds in hand. What motivated me, was that struggle-not power, but passion. I knew then, what I know now, that if it had been me I was promoting, I would have been competition for Madonna. But, it is also what you promote. My feeling is that if it is a product-it has to be virtuous, pure and , marketable. If it is a charity, then it has to be above reproach and fastidious in its lineage and heirs. If it is a person or a band, then it has to be loyal and true, built of the same mettle as me (at least) and it has to be ready to work. Above all is the immovable line of resolve, no wavering at the finish line.

In art the contract is everything. A bad contract is a very bad deal indeed. In ballet, there is practically no refuge for the artist. They get what they get. Artists are unfortunately not taught business and most of them only begin to learn when they are recovering (if they do) from being stepped on. I have learned more from my mistakes than my successes. But, there is a strange similarity between a baby and a business. You become attached. No matter whether you know your business isn’t perfect, you love it, you have created it, you hold onto it, until you just have to let it go. It is a part of you. You can feel this way after 2 years in a business, even 1 year. After 18 years, the roots are no different than the tree.

So, Boadicea, with her raped daughters, her outrage, her unconquerable spirit, her ability to rally her people, her martyr-like death, have always seemed to me to perfectly triangulate the ohm in my mantra. Ohmmmm. Ohmmmm. Nothing else makes perfect sense but life and death, and protection of your creation, whatever it is. It starts out very benignly, like a ballet class, or a little drawing of a Pagoda, or jumping around on the couches, perhaps, twanging a guitar, but after it evolves to become part of you, and you have nurtured it, sewn it, and aggregated it, daily, weekly, monthly, and each year, it becomes intrinsic to you. It is you. I believe that is what defines most dancers, musicians, artists, etc., it is that what they do defines them, enables them to communicate in another language, to a central part of their own spirit, which reaches out to other like spirits, as an energy, more than a thing. When I look back at my drawings, I do not see the lines, or the brush strokes. At first I feel a rushing, like wind, as part of my own energy calls to me, remembering that moment, that part of my own spirit and feelings (of the moment) that that artwork contains. Only after that rush has subsided can I look at the work or enjoy it. First-we recognize each other.

Of course there is a sense of pride, that when you look back at a thing, 30 years later, it still remembers you, and you it. But, there is also, that feeling that I did that, and it still lives and breathes my feelings of that moment, it communicates, still. Although ballet is literally a moment, it is the same, and a piece of music, once created, is a thing always enjoyed. This passion stems from the selfsame place as Boadicea’s, although hers is a bonfire, where mine might be a flame, they are both of the same elemental importance. As parents, we nurture our young, and pass on even these sorts of feelings, the same way we might pass on technique, a combination, or a story. We look to our young and most often I find, rather than one little thing like a grade, I am trying to pass on that fiery passion for learning, for life and for survival, that must be present in an artist and a warrior.

I am happy to say that each one of my children, in his/her own way, possess that spirit, entrepreneurial or not. But I feel that if they eventually catch fire, then I have succeeded. When I think of Boadicea now, I think of my daughter, and my sons, alternately in the chariot, with their children cupped under one breast, a sword in one hand, the reins in the other, hair flying.